The goal of this post is to review a number of methods that approximate Bayes factors or marginalized likelihoods.

A model , in the Bayesian sense, is a pair consisting of a conditional likelihood function for observable data together with a prior over parameter vector . Ideally, we might like to assess the absolute probability of model after seeing data . We can express this quantity using Bayes rule:

Quantifying over the whole class of possible models is dauntingly complex. This likely remains true even for a fixed data set and within a confined sub-genre of models (e.g., all regression models with combinations of a finite set of explanatory factors).

A good solution is to be more modest and to compare just two models to each other. The question to ask is then: How much does the observation of data impact our beliefs about the relative model probabilities? We can express this using Bayes rule as the ratio of our posterior beliefs about models, which eliminates the need to have the normalizing constant for the previous equation, like so:

The fraction on the left-hand side is the posterior odds ratio: our relative beliefs about models and after seeing data . On the right-hand side we have a product of two intuitively interpretable quantities. First, there is the prior odds: our relative beliefs about models and before seeing data . Second, there is the so-called Bayes factor. This way of introducing Bayes factors invites to think of them as the factor by which our prior odds change in the light of the data.

While Bayes factors are conceptually appealing, their computation can still be very complex. The quantity is often called the marginal likelihood. (It is also sometimes called the evidence but this usage of the term may be misleading because in natural language we usually refer to observational data as ‘evidence’; rather the Bayes factor is a plausible formalization of ‘evidence’ in favor of a model.) This term looks inoccuous but it is not. It can be a viciously complicated integral, because the likelihood of observation under the model must quantify over all possible parameters of that model, weighed as usual by their priors:

You may recognize in this integral the normalizing constant needed for parameter inference if we drop explicit reference to the specific model currently in focus:

The following will spell out some methods for computing a Bayes factor. We apply these methods to the same models so that we can compare directly the results from each method and its results. The methods covered here are:

Data and full scripts (only the most important parts of which are shown here) are available for download.

Chapter 17 of Lee & Wagenmakers’ (2014) textbook on Bayesian Cognitive Modeling features a concise implementation of the classic Generalized Context Model (GCM) of categorization. The model aims to predict the likelihood of correctly categorizing items after an initial learning period. Items differ along a number of numeric feature dimensions. (In the present case there will just be two categories and two feature dimensions.) The GCM revolves around three assumptions: (i) the probability of classifying item as belonging to category is derived from a measure of relative similarity of to all those items which were presented as belonging to category during training; (ii) similarity of any two items is a function of relative weighing of feature dimensions; (iii) there is room for general category preference (category is more likely to be chosen accross the board). (See chapter 17 of Lee & Wagenmakers and the papers cited therein for further details.)

In its simplest form, the model aims to predict the population-level category choices for nstim = 8 different stimuli. Category membership is stored in variable a = c(1,1,1,2,1,2,2,2), where an entry of 1 for the -th item means that it was presented as belonging to the first category during training. There are t = 320 trials in total (from different participants, but we do not distinguish these here.) The correct category choices (where correctness is determined by a) are stored in variable y = c(245, 218, 255, 126, 182, 71, 102, 65). Additionally, we supply two distance matrices d1 and d2 that give the distance between any two items along the two feature dimensions.

In the implementation of Lee & Wagenmakers, the GCM has three meaningful parameters, but we set the bias weight to b = 0.5:

A visualization of the model as a probabilistic dependency net is this (taken from Lee & Wagenmakers 2014, Chapter 17): 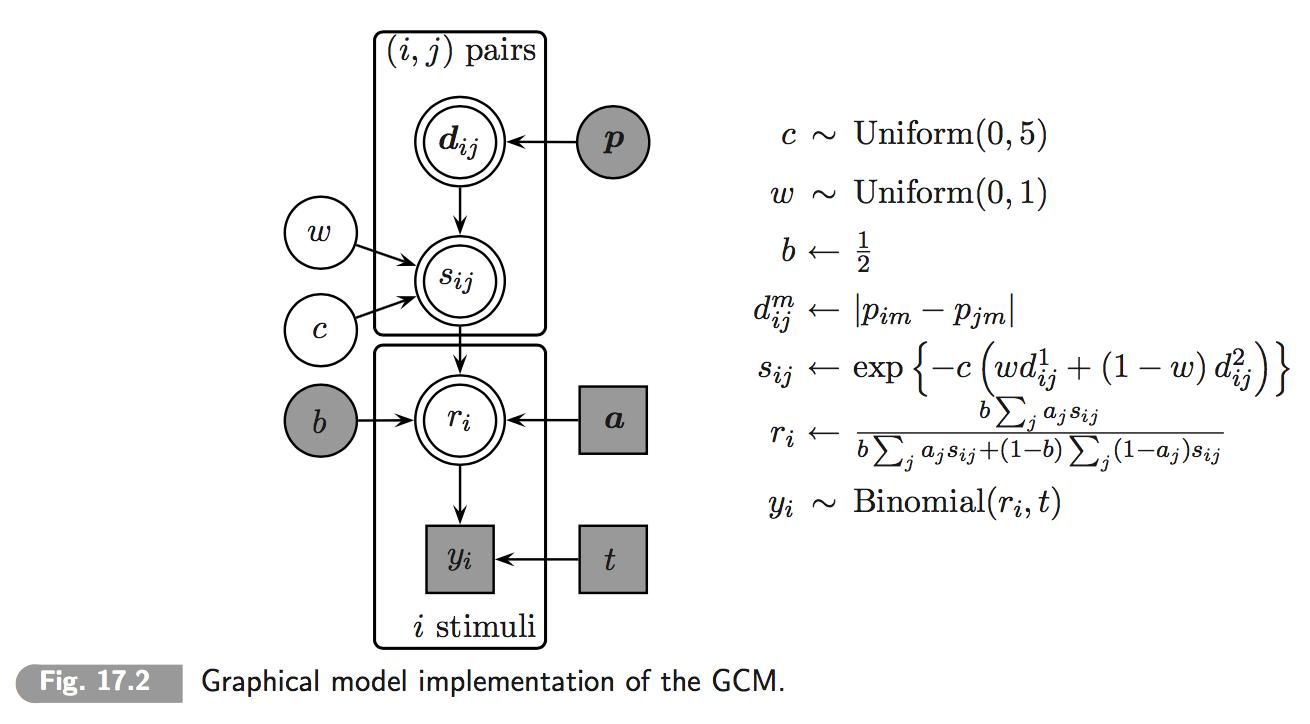 We are interested in comparing two models, both variants of the GCM. The first, more complex model is the one shown up here where weight has a flat prior over the unit interval w ~ dbeta(1,1). The second, simpler model is essentially the same but fixes the value of weight w = 0.5. This means that these models are so-called properly nested models and this, in turn, allows for computation of Bayes factors by the Savage-Dickey method.

The Savage-Dickey density ratio method for calculating Bayes factors is particularly nice and elegant. An excellent tutorial on this method is [Wagenmakers et. al (2010)].

If models are properly nested we can compute the Bayes factor with the Savage-Dickey method as follows:

This seemingly magical result states that in order to compute the Bayes factor we only need to look at the ratio of the posterior of the parameters under the more complex model given data and the prior of under . To see that the above holds (the feeling of magic notwithstanding), here’s a proof sketch:

The above is a direct consequence of this last line.

Let’s illustrate the Savage-Dickey method with a simpler example for which we can also give an analytic solution for the Bayes factor. Suppose we observed k=7 successes in N=24 flips of a coin. The complex model has a likelihood function and a prior . The simpler (nested) model has the same likelihood function but fixes . We can then compute the Bayes factor in favor of the simpler as follows:

Savage-Dickey for the GCM example

Unlike for the previous simple coin-flip example, we do not know the precise mathematical form of the posterior over for the GCM. We can nonetheless use the Savage-Dickey method to approximate Bayes factors, by using an approximation of the posterior probability density for using samples from posterior distribution of . Posterior samples are here obtained using JAGS.

The JAGS code for the GCM looks like this (taken from Lee & Wagenmakers, 2014), and is stored in file GCM_1_posterior_inference.txt :

We will run the JAGS model through R. The code for doing so is contained in the file GCM_1_posterior_inference.R. First, we load some required packages:

Then we run JAGS and retrieve 50000 samples of the posterior over after a burn-in of 15000, once for each of two chains.

We can then estimate the posterior density at , using the log-splines package:

An approximation of the Bayes factor in favor of the complex model is then:

In sum, the Savage-Dickey method is an elegant and practical method for computing (or approximating, if based on sampling) Bayes factors for properly nested models. It is particularly useful when the nested model fixes just a small number of parameters that are free in the nesting model. The method needs to go through two bottlenecks that can introduce imprecision in an estimate: first, we may have to rely on posterior samples; second, we may have to rely an numerical approximation of a point-density from the samples.

While the Savage-Dickey method targets calculation of the Bayes factor directly, we can also target a single model’s marginal likelihood, as described above. Under certain circumstances (see end of this section for a critical assessment), even naive Monte Carlo simulation can work well and is very easy to implement when we already have a way of generating posterior samples, e.g., using an implementation in JAGS or similar software.

Notice that the script also introduces a parameterization of the prior for w. This is handy because it allows us to use the same JAGS code for both models. (We need to compute the marginal likelihood for each model to obtain the Bayes factor estimate.)

First, it defines a function that takes a betaParameter argument for the beta-prior over w to be fed to JAGS. The function returns 200,000 samples of the data’s likelihood under the prior.

To compute an approximate Bayes factor in this way, we call this function twice: once for the more complex, nesting model for which we set betaParameter = 1; and once for the simpler, nested model for which we approximate a fixed value of w = 0.5 simply by setting betaParameter = 50000. (This yields a very heavily peaked beta prior with mode at w=0.5 and should be good enough an approximation for our modest purposes.)

The final result is reaonably close to the previous one from the Savage-Dickey method:

It is diagnostic to see the temporal development of the Bayes factor approximation as more and more samples are taken. This is plotted here, comparing it also to the result from the Savage-Dickey method (the red line). 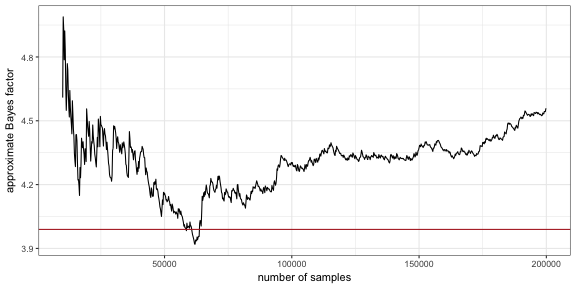 The script in file GCM_3_BF_transdimensional.R collects posterior samples from the model above.

All we really need to do is collect samples of the posterior over :

Since we assumed that models are equally probable a priori (by taking ), the fraction of samples for which approximates the Bayes factor in favor of the complex model:

This method of estimation can be imprecise, especially when one model is much better than another. The intuitive reason is that whenever the MCMC chain sets , the parameters for model are free to meander wherever they like. This, in turn, makes it less likely that a proposal with is accepted. One possible solution to this is to use so-called pseudo-priors: set the priors for parameters of model to some function that resembles their posterior distribution when , but use the actual priors when .

A method similar to the previous promises to get around this problem, at least when the models’ marginal likelihoods are not too different. I will refer to this approach as ‘supermodels’ here, taking inspiration from this tutorial paper. Instead of a model flag, which determines which model’s likelihood function to use, we instead combine the model’s likelihoods in a linear way. Concretely, given parameter vectors and for models and respectively, we look at a model which contains both and and which has as the likelihood function of the data:

It is easy to show that for a flat prior , the posterior of is linear:

Since the posterior of is a distribution which satisfies , we get that . Since each model nested under the supermodel is a special case of either or we can use the Savage-Dickey method to express the posterior of as a function of only:

To obtain posterior samples from we use the JAGS code found in GCM_4_supermodels.txt.

The code is reproduced here:

Since JAGS only allows sampling from or conditioning by distributions that it knows, we need to use the zero trick (alternatively: the one trick) to implement our custom linear-combination likelihood function.

We then collect samples from the posterior of :

Subsequently, we obtain a point-estimate for the best-fitting that may have generated these posterior samples and compute the Bayes factor from it with the following function:

This gives us another estimate of the Bayes factor:

The estimated Bayes factors all differed to a certain extent. The quality of the estimates could be enhanced by taking more samples in each case. Estimates that additionally depend on later approximate computations are generally less preferred. For example, we used logsplines to estimate the posterior density at a point based on MCMC samples for the Savage-Dickey method; we looked at the maximum likelihood estimate for intercept in the supermodels approach. My impression is that the most workable and scalable methods are those that approximate marginal likelihoods individually and do not require post-sampling approximations. Here, only naive MC sampling was covered. A great recent tutorial for more sophisticated methods can be found here. In sum, although I like the supermodels approach best (conceptual elegance!), currently my money is on bridge sampling whenever a model does not allow for a brute force method like grid approximation or naive MC sampling.